Not since Aaron’s notorious idol misjudgement on Mount Sinai has a life-size aureate bovine caused quite such a stir.  Jiangsu Party guy Wu Renbao’s decision to install a £31m solid gold statue of an ox on the 60th floor of rural Huaxi’s new 1,076ft supertower has been branded a gross extravagance by some, particularly as many of the farmers who live in its shadow earn low wages. 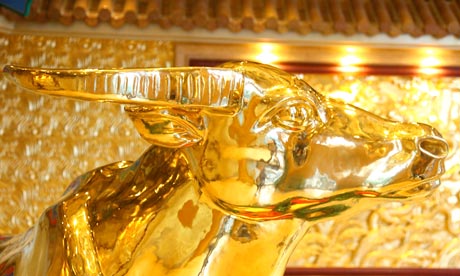 Villagers have reportedly started a helicopter business to give visitors a better view of the tower – which could be seen as indicative of the sort of Wu-instilled entrepreneurial zeal that has made Huaxi one of the richest villages in China and led to him to be decorated as a “Top National Contributor to Poverty-Alleviation”.  However I am not convinced of the long term economic rewards of skyscraper one-upmanship.