Something everybody knew, but would probably have preferred not to have had confirmed, has been confirmed by CCTV this week. 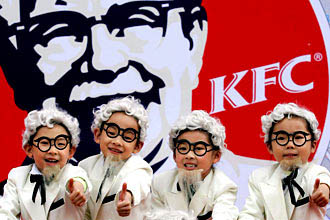 OK, here comes the science bit – a Beijing KFC’s ice cubes were reported to contain 900 colony-forming units (CFU) of bacteria per millilitre.  That is 13 times more than toilet water and more than 20 times the national limit (though to my mind 45 CFUs per millilitre doesn’t sound that healthy either).

However rest assured that shrimp flavoured potato chips have been given the all clear.

If you’re going to find yourself hanging from a fourth floor window ledge, try to make sure you have this set of helpful Zhejiang couriers down below you.

Ideally, in these circumstances, the ground crew will have time to put a full bed-sheet plan into operation (see illustration below) – however, the gang managed to break the toddler’s fall well enough and she was left with only minor injuries.

Not as well known as Hong Kong or Shanghai for it’s upwards protrusions, Beijing does still have its fair share of mighty erections.  And, with the skyline already boasting one building firmly in the the trouser department (the quite unique CCTV Headquarters, commonly known as 大裤衩 or “Big Pants”), purile Beijingers now been handed the gift of the new People’s Daily HQ to laugh at:

A big Brushduck shout out to 14.5 year old amateur Guan Tianlang, who tees off for his Masters debut at the Augusta National Golf Club today as the tournament’s youngest ever player. 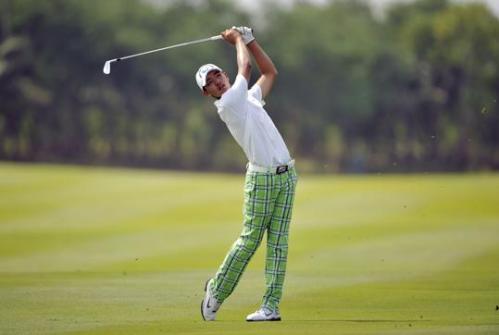 I hope he has a spare pair of those trousers – in case he gets a hole in one!

Stay tuned to this blog where we will be reporting on his tournament on Sunday night (if he wins).

Man who denounced his mother denounces his actions

A moving video report from the Guardian.

Anonymous stories of children denouncing their parents as counterrevolutionaries are often used to illustrate the all-pervasive horrors of the Cultural Revolution.  However, it is a brave move for this man to talk openly about his regrets over his actions forty-three years on.

How to unload bamboo

We’ve all tried a nifty shortcut on the way home when sozzled.  But when rolling back from his village local in rural Zhejiang in the early hours of Thursday morning, I’m sure this man didn’t expect his ambitious diversion would end up being splashed across the UK’s finest (Sun, Daily Mail).

The unfortunate man had to wait til morning to be rescued when the owner of one of the walls (pictured on the left) allowed the fire department to knock through it.

A lesson to all.

Often seen as the world’s biggest goody goody, the Dalai Lama has been accused by chairman of the Tibet Autonomous Region People’s Congress (TAR) Chadma Poling of paying Tibetans in areas of Sichuan, Gansu and Qinghai in China’s south-west to set themselves on fire to stick it to the Chinese government.  While Brushduck has no proof of the truth or otherwise of the these allegations, Chadma Poling has!  But he says that disclosure is not convenient.

Further, the state-run Chinese website China Tibet Online revealed last week that Lhamo Kyab, referred to as a senior member of the “Dalai Lama clique’s education system”, has authored a “Self-immolation Guide” which aims to aims to “standardize and systematize the self-immolation behavior so as to manipulate it like an assembly line in the future”, in order to promote the Dalai Lama goals, which it says include protest against Chinese rule.

The Tibetan government-in-exile in Dharamsala has, unsurprisingly, distanced itself from both Lhamo Kyab and his guide.  However, the Dalia Lama has been criticised in the past for failing to denounce incidents of self-immolation.

The tragedy remains that since 27 February 2009, when a young Tibetan monk called Tapey attempted self-immolation in a marketplace in Sichuan, it is estimated that 78 Tibetans have burned themselves to death on account of their discontent with Chinese rule.   The frequency of incidents peaked between March 2011 and March 2012, following the death of Phuntsog, again in Sichuan.

With the exciting news that David Beckham has been named as the first global ambassador for Chinese football, Brushduck presents a quick, and sometimes accurate, guide to the essential lingo for those tracking Becks in his new and exerting role tackling corruption in the Chinese Super League (CSL):

WATCHING YOU: “Riches and honor depend on heaven”

D-Beck’s aptitude for foreign languages is well known – see below, for example, his final press conference in Spanish in 2007 following 4 years spent with La Liga giants Real Madrid.  We hope the England legend is currently perfecting his tones ahead of his head first dive into the murky underworld of Chinese football.  “I got the ball ref!”

Have we missed any essential Becks vocab?  Comments welcome below!

Since the breaking news appeared on  Xi’an Up Close that a mystery mushroom had been discovered in Xi’an, it seems that the fungus has become the must have commodity on account of its amazing medicinal properties.

Rare specimens have been illicitly traded on the streets:

And recipes to bring out the best of the elusive mycetoza’s special qualities have appeared online:

Predicting a 21st century gold rush I’m off to Shaanxi province to see if I can’t grab a few.  These will be available for £199.99/kg on return, cheques to Brushduck.